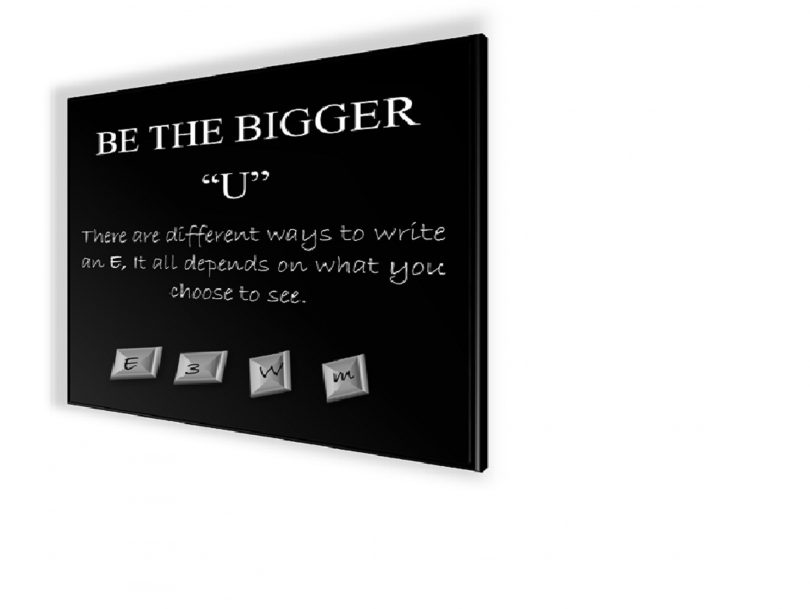 Being the bigger you in any context can be related to being the peace maker, being a mediator and the one who swallows his or her pride for peace to reign……………

Being the bigger you in any context can be related to being the peace maker, being a mediator and the one who swallows his or her pride for peace to reign.  It does not make you a weaker person even though it seems so, but it just means you have seen the bigger picture and decided that succeeding at whatever objectives you had in mind is more important than your own opinion counting at that moment. Your opinion is not completely dismissed, rather your opinion might surface when it is needed or where other opinions fail, and this in itself attracts a new level of respect since those who disagreed with you earlier have realized that you were right all the time.

Being the bigger you means you will be the first person to make peace even when you were severely hurt, emotionally, physically and otherwise.  Does this mean the pains of hurt where gone or you were never hurt.  No! It simply means that even though you were bruised, hurt and shamed in the process, even though you were right, you extended the olive branch and a handshake, just so you succeed with whatever venture you set out to achieve in the first place.  Have you considered that telling the others how badly hurt you were, becomes easy when all the parties is at peace with each other. This is because both of you have decided to see the story from the other side.

Most times when tempers fly and finally drops, things move smoothly, if you always stay in the part of peace people see you as a coward, a pretender, a man pleaser but that is so wrong because it takes a lot of guts and maturity to make peace. Laying low for others to be heard is something that takes a lot of maturity and confidence to achieve.  No matter how annoying and offensive the other party’s opinion is, it teaches you patience, calmness, forgiveness and compassion. Though conflicting opinion sometimes births rivalry but in conflict, diverse opinion can also give birth to diverse solutions, and the best out of all becomes the choicest solution to the issue under contention.

Being the bigger you means your thoughts and actions are now matured because you now see things from other people’s standpoint, meaning that you have decided to hear and listen to the other party even when you do not agree with them. Remember that letter “E” seen from different angles can become a “W”, an “M” and even a number “3” depending on your handwriting and from the position you stand. This analogy applied in every context and conflict will help in resolving issues very fast and in the best way possible.  Therefore try and figure things out from all the four angles and apply each on every one of them in the context at hand, check the one that is advantageous and favorable for all the parties concerned and the issue is resolved

Being the bigger you means trying not to turn arguments in to conflicts, rivalry and everlasting enmity in any context; meaning that you do not let your pride get in the way of good reasoning and fairness but you allow the superior opinion and idea win at all times. Even the book of the bible recommends that we try to live peaceably with all men even when God knows that there will always been conflicts.  So why not strive for peace and forget about muddling in the pool of conflict just so that you prove that you are right and better. Be the bigger you, let “self” be de-emphasized and “we” be emphasized am sure it will make the world better and easy place to live in. #BetheBiggerU #Maturityredefined

Tell us how you feel about the write up? I will love to read your comments.  Bless you